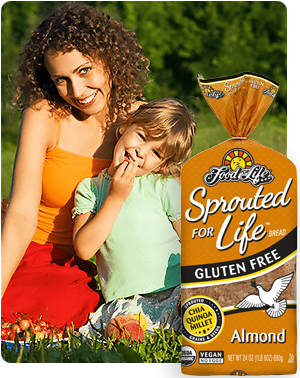 After countless hours of research and development, Food For Life is pleased to release Sprouted for Life Bread—the first available Gluten Free Breads made from Sprouted Grains such as Quinoa, Millet and Chia.

It has become clear that many of the gluten free breads on the market today, while being "gluten free", are simply not addressing the overall health needs of consumers.   You see, gluten free breads lack the one component that gives bread that familiar soft chewy texture.  And, that component is gluten.

Without Gluten, manufacturers are forced to use alternative ingredients that mimic the elasticity that gluten provides.  And, many of them are choosing to feature egg whites and refined starches today.
However, in their quest to achieve even greater

elasticity in an effort to win out on the soft and chewy test, consumers are seeing an ever expanding list of gluten free breads made from ingredients which you wouldn’t expect in “natural” breads. Some of which are sadly devoid of many nutrients.  Yes, the race to replace gluten has gotten to the point where it really needed to be addressed for the benefit of the gluten intolerant consumer.

And, that is really the inspiration behind Food For Life's Sprouted For Life™ Gluten-Free Breads.  Finally, a completely gluten free bread line in 4 varieties specifically created with your health in mind.  Not only are they gluten free, but they are also vegan, and are made from incredibly nutritious superseeds like sprouted quinoa, sprouted millet and sprouted chia seeds.

Sprouted to maximize nutrition and digestibility.  Available now in the frozen section.

With just one bite, you’ll know they’re a food for life!